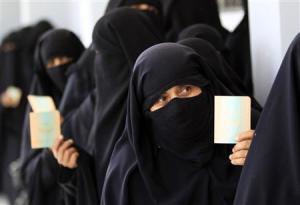 Yemen, voted to endorse Saleh’s deputy as president, with a mission to rescue the nation from poverty, chaos and the brink of civil war. At stake is an economy left in shambles, where 42 percent live on less than $2 per day and runaway inflation is driving up food and fuel prices.

An official from the election security committee estimated a turnout of 80 percent, although final results will not be known for several days. Vice President Abd-Rabbu Mansour Hadi, the sole, consensus candidate, billed the vote as a way to move on after months of protests against Saleh’s rule.

The vote will make Saleh the fourth Arab autocrat in a year to be removed from power after revolutions in Tunisia, Egypt and Libya.

“These are not real elections it is just formalizing the American-backed GCC initiative which aimed to control the Yemeni revolution.” said Dayfallah al-Shami, member of the Houthis’ leadership council. “

Only two possible verdicts in the Derek Chauvin’s trial: “Mistrial” or “Second-degree Murder”. Whatever the outcome, Derek Chauvin’s fate will become a catalyst for right-wing and left-wing extremist-group violence. As Chauvin’s murder trial for the death of George Floyd continues in Minneapolis, anarchists and white supremacists are already attempting to exploit activities and events surrounding […]