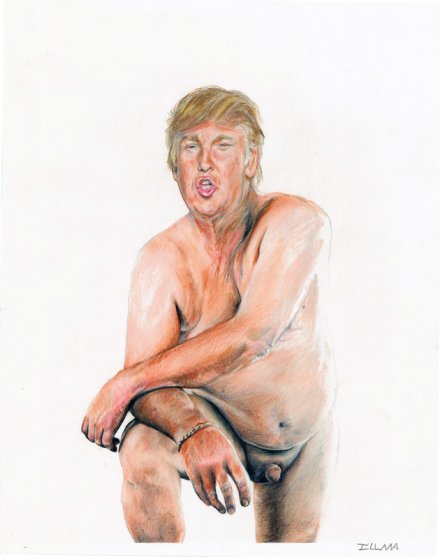 “Make America Great Again” Because no matter what is in your pants, you can still be a big prick. – Illma Gore

“Political correctness” is a term describing language, policies and measures intended not to offend or disadvantage any particular group of people in a community or society. As Clint Eastwood would say, “We now live in a pussy generation” where if you say the wrong thing, you may be penalized, lose your job or even taken to court.

Every single day, media bombards us with subtle messages about what we should believe and what appropriate speech consists of. Most of the time, most of us quietly fall in line with this unwritten speech code. Those that would dare to buck the system are finding out that the consequences can be rather severe and the younger generation is particularly susceptible to this media’s power of suggestion and when we, the people go to work or go to school, the conversations that we have with others are mostly based on content that the media feeds us.

The media is not the only source that is telling us what to think. The messaging that comes from all of our major institutions either governmental, social or educational is remarkably consistent. The establishment have a relentless propaganda machine that never stops working, trying to control what we say and how we think or how we should think. Freethinkers are now a rare breed and understanding what is being done to us is the first step toward breaking free. The way that we all see the world today has been greatly shaped by the thousands of hours of thought training and indoctrination that we have all received over the years.

Again, as Clint Eastwood would say, “Anyone offended by Donald Trump’s so-called racist remarks attitude and language should just fucking get over it.”

Saying that a judge is prejudicial or bias because of his descent is definitely a dumb thing to say but that does not mean that you are racist. Saying that a specific individual of a specific descent may be prejudicial or detrimental to you because of your previously expressed opinions is a totally different story and has nothing to do with racism. Saying that one is a racist or a bigot because he is saying that we shall limit all Muslim entries in a country, saying that all illegal immigrants shall be deported out of a country if they do not comply with the immigration laws… Come on! This is only common sense; this is in no way racism or bigotry.

In the sixties my mother, like many thousand others, had to sign for and endorse my father, an illegal American immigrant to Canada were he has been working and paying taxes for more than 10 years. My father had to reluctantly kneel in front of the queen and kiss her ass in order to stay in Canada and provide for his family. Does that mean that the Canadian are racists? Come on, like my father, just get the fuck over it! Immigration laws are for everyone including those, like my father, that originally did not comply and started a family in a foreign land.

Saying that there should be a stringent vetting system for all immigrants and refugees, especially for those coming from proselytized countries in any way of form… Come on! This is only common sense; you want to come and live in my house, you have to live according to the rules of my house. When I go to Rome, I dress and eat like the Romans. I know how to show respect! Do you really believe that Donald J. Trump is the only person in the world that is really fed up with the illegal immigrants, Islamic people and refugees of all breed? Come on; wake up! Look around: Trump is only saying out loud what millions of people are thinking all around the world. Trump may well have small hands but he definitely has big cojones.

Too much ass kissing and not enough ass kicking!

Secretly or privately, everybody is getting tired of political correctness and kissing up asses. We live in a kiss ass generation. We are in it right now and it is a very sad story. Everybody’s walking on eggshells. People are accusing people of being racist, being bigot, being atheist, being birther, being whatever. People are blaming everyone except themselves for their own misery, their condition and the way they live. Come on, get over it! Man up! When I grew up, those things were not happening. We were not happy with our live, we were doing something about it. Instead of complaining about them and moaning like a child, we knew how to deal with assholes and abusers of all kinds. When we saw snakes, we were not having a meeting about it; we killed snakes!

Personally, I do believe that our planet should be a global village without any kind of frontier, territorial, economical or geographical. I do believe in a world where everybody should live according to one and only one rule: The Golden rule! Evidently, humanity being what it is now, this is not tomorrow the day.

We all live in a kiss ass generation!

All across the world, some, especially the pundits and the media would say and insist that Trump is inciting political violence, that he is a serial liar, a rampant xenophobe and all these other things. I am certainly not to discuss all these issues. It would be losing my time: people only hear what they want to hear. People do not want to hear the truth, they only want you to confirm what they perceive as being the truth. To all of you, owner of the only and holy truth, I would say only a few things: Wake up kiddos! Just get over it! Open your eyes! Finally, after decades of stifling political economical and religious correctness norms, millions have found their voices and it is not a pretty sound.

How are we ever going to have authentic, meaningful conversations about sensitive issues of race, gender, religion, sexual orientation, cultural difference and values if we cannot talk about what is really on our minds? How can we build bridges of understanding if we cannot speak openly? Are we really so fragile, so sensitive, that we cannot bear to hear someone else speak their truth, even if that truth is painful to hear? Do we really need to be protected from each other’s perceptions, fears, anger and resentment? Are our feelings so delicate that we cannot bear to listen to the pain, confusion, and frustration that other carry in their hearts?

We will never rid of the world prejudices or biases, racism, sexism, bigotry, and xenophobia by prohibiting uncomfortable, painful conversations. For decades, social, religious and political correctness proponents of all kinds and breeds have said: “Never share your true feelings and thoughts, especially if they are negative. Political correctness has a down side, and we are all seeing it big time. By not allowing people to speak of their fear of others, their financial and social anxiety, their despair about the future, we have failed to deal with the chronic, soul-crushing pain that millions have been feeling for a long time.

Today, unseen before, a politician is making it OK for people to talk about what is really on their minds with no filter between their brain and their mouth. Donald J. Trump, even if it may cost him dearly, does not self-censor and that is one of the things that is appealing to his admirers.

It is about a year ago that Donald Trump stormed onto the political scene.

Those who regularly and constantly advocate political correctness are motivated primarily by either their own personal concerns or by the emotional wellbeing of their ostensibly vulnerable minority community. Their concerns have nothing to do with the general or national interest of a global population and I tend to agree with Trump when he says: “I think the big problem this country has is being politically correct. I’ve been challenged by so many people, and I Do not frankly have time for total political correctness. And to be honest with you, this country [or any other in the world as a matter of fact], does not have time either.”

Many had and still have concerns about Trump. They questioned and are still questioning whether someone with such cutting yet candid honesty, a candidate who veered so sharply from so many of the usual political expectations, could ever become president. Rather than backing down, Trump is still pushing forward.

Today, political correctness with peer-engendered public shaming is now the social reality and there is a contingency of people and pundits that seek not just to diminish alternate viewpoints, but to repress them altogether. It is this kind of mindset, the hostile advocacy of platitudes over polite dissent, dictatorial silencing over thoughtful engagement and censorship over free interchange, that took many from reticent acceptance of Trump’s approach to passionate advocacy.

Yet it is his honest advocacy for his deeply held beliefs that has emboldened many to speak out confidently for their positions, and to ignore the anonymous attacks and scoffing jeers of the naysayers.

Trump has set and is still setting the politically correct walls aflame.

JMD is an enthusiastic private and public events speaker, writer, syndicated columnist and social activist who most enjoys evolving in complex interactive situations.

The Hill We Climb

Amanda Gorman, The 22-year-old Harvard poet that stole the Biden inauguration show When day comes, we ask ourselves where can we find light in this never-ending shade?The loss we carry, a sea we must wade.We’ve braved the belly of the beast.We’ve learned that quiet isn’t always peace,and the norms and notions of what “just” is […]

The Ignorant Bouffons of The Clown In Chief: Donald J. Trump

These are the Ignorant Bouffons of The Clown In Chief Donald J. Trump Many of the rioters and protesters of the siege of the US Capitol on January 6 looked an awful lot like these Republican congressmen and senators supporting their now infamous egomaniac narcissist leader, this coalition of willing deadbeats, QAnon enthusiasts, right-wing […]

In only a few days, Telegram Messenger Becomes The Second Most Downloaded App In The US Telegram Messenger is now ranked second in the most downloaded applications in the United States. This is happening after Twitter blocked the Trump’s account, Apple and Google removed from their app stores the popular social network of his Parler […]

Parler Is Off ~ Good riddance!

John Matze, Parler’s CEO: “There is the possibility Parler will be unavailable on the internet for up to a week as we rebuild from scratch.”  Following the Trump Washington Capitol riot of January 6, Amazon Web Services decided to cut off Parler servers. The move came after Google and Apple also banned the infamous right-wing […]

Dear readers,   Starting at around 4:30PM Eastern Time December 15th, Google suffered a global outage. A catastrophic failure at Gmail had caused emails sent to Gmail to permanently fail and bounce back.   The error message from Gmail was reading as follow:     550-5.1.1 The email account that you tried to reach […]