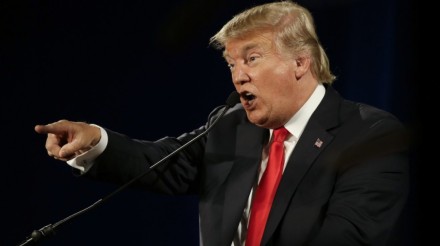 “A lot of people are going to be very happy.”

Saturday August 30, Donald Trump promised to make an announcement “very soon” on whether he will rule out running as an independent candidate. For a few weeks now, State Republicans parties have been trying to put the squeeze on the billionaire businessman, who has yet to rule out a potential spoiler role. In order to appear on the South Carolina GOP primary ballot, the Republican presidential candidate must pledge by September 30 that he will not launch an independent or third party bid if he fails to win the nomination. And Trump has repeatedly refused to firmly close the door on such a move.

Speaking to the press after an hour-long speech to the National Federation of Republican Assemblies, the Trump said: “the Republican Party has been treating me very, very fairly. All I ask is fairness. Over the next couple of weeks, you’re going to see some things that are very interesting. I’ve been treated very nicely. I’m leading in every poll … I have a great relationship to the Republican Party, to the conservatives, to the evangelicals. … In terms of victory, running as a Republican would certainly be the best path to victory. We’re going to make a decision very soon, and I think a lot of people are going to be very happy.”

Asked if his staffs are fair game, Trump replied: “Sure they are,” but criticized his staff for putting up a sign at an event he had in Massachusetts Friday night that asked $100 per person for entry, allowing the press to describe it as a fundraiser when it should not have been called that. “I spend millions of dollars on jet fuel,” he said. “I’m turning down millions. I don’t want your money!” “I got so angry at my people because someone put up a sign saying $100,” he said. “First of all, its peanuts. It doesn’t mean anything. But they used it to try to marginalize me. The bottom line, is I’m self-funding my campaign.”

As an independent, Trump would won the presidential race!

JMD is an enthusiastic writer, columnist and social activist who most enjoys evolving in complex interactive situations.

This site uses Akismet to reduce spam. Learn how your comment data is processed.