Will China be the next superpower of the world? 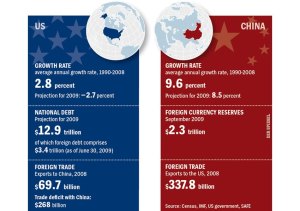 Hong Kong — Thousands of senior Chinese officials are gathering in Beijing for a week of lengthy speeches and meetings. At the end of this once in a decade process, The Communist Party’s 18th National Congress, a new set of top Chinese leaders will be revealed to the world. China’s prospective leaders, rise to the top by showing how loyal they are to the incumbent. What they will do when they rise to the top, that they will not show or tell.

While rumors continue to circulate about possible democratic reforms in the wake of the recent huge political scandal involving the former senior party official Bo Xilai, and widespread corruption among officials throughout the country, some say they expect measures to reshape China’s huge economy. Others predict the army may have a stronger influence over territorial disputes with neighbors like Japan.

What we do know is that in the recent years China’s economy has continued to grow, lifting tens of millions of people out of poverty and that China is now the world’s second-biggest economy and closing fast on the United States.

Do the next leaders of the Chinese nation have plans to be the first superpower of the world?

They will not tell but that is exactly where they are heading.