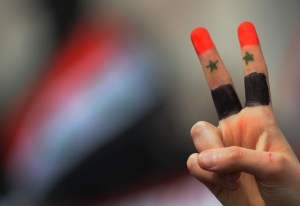 The six countries in the Gulf Cooperation Council will close their Syrian embassies. The Gulf Cooperation Council which include the United Arab Emirates, Bahrain, Saudi Arabia, Oman, Qatar and Kuwait, also called on the international community to take urgent and firm actions to stop what is going on in Syria including killing, torturing and flagrant violations of the human rights of the Syrian people. Nations including the United States and France previously have closed their embassies in Damascus, while Italy, Britain and Spain are among countries that have suspended embassy activities.

Along with the thousands of deaths this year, countless other people are missing, thousands are injured and thousands have been displaced. And as the international community ponders a solution, the daily carnage seems endless. The embattled regime pressed on Thursday in its assault across Idlib province, where there is strong opposition sentiment. According to the state-run Syrian Arab News Agency (SANA), government security forces, which have been bombarding the city of Idlib, cleared it of “terrorist” elements, confiscated explosives and weapons and battled “armed terrorist groups” in the surrounding countryside.

Government forces with large-caliber machine-guns, tanks and mortars fired “indiscriminately at buildings and people in the street. After they entered Idlib, government forces detained people in house-to-house searches, looted buildings, and burned down houses,” Human Rights Watch said, citing witness accounts. Aside from the deaths in Idlib, the LCC reported other deaths in Hama, Daraa, Homs and Aleppo.

Al-Assad’s regime routinely insists “armed terrorist groups” are behind the bloodshed in Syria. It says it has popular support for its actions, and Thursday, government news outlets reported thousands of Syrians gathering in city squares to show their “love” and loyalty” for their homeland.

The AL-Assad family has ruled Syria for more than four decades.

This site uses Akismet to reduce spam. Learn how your comment data is processed.